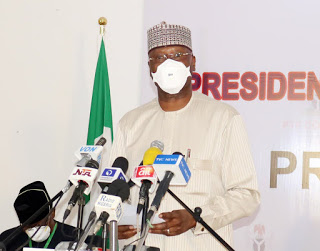 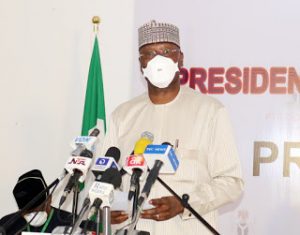 The Secretary to the govt of the Federation and Chairman of the Presidential Task Force on COVID-19, Boss Mustapha has told Nigerians to expect a huge COVID-19 infections in the next two weeks.

Mustapha who said this at PTF’s briefing on Tuesday November 3, condemned the careless act of travellers failing to present themselves for Coronavirus tests upon arriving the country.

The SGF said statistics from the nation’s records showed that just one out of three passengers had shown up for the in-country test they signed up for before arrival.

The PTF at the last briefing cautioned on the necessity to avoid complacency on account of the low number of infections published daily and therefore the possibility of a second wave. That advice was premised on the very fact that risk perception remains very low and sample collection has been on the decline.

Mustapha also expressed fear of the recent governorship elections in Edo and Ondo States also because the #EndSARS nationwide protests triggering an increased Coronavirus infection within the country.

The PTF is highlighting these issues repeatedly because we remain at risk of importation, having opened our airspace and massive spread as a results of the protests. the next week or two remain critical.

The PTF similarly announced sanctions as a consequence of any infraction. Having observed serious non-compliance to the level of 65%, the necessity has arisen to activate the sanctions, including the suspension of the passports of such defaulting individuals for a period of six months minimum.